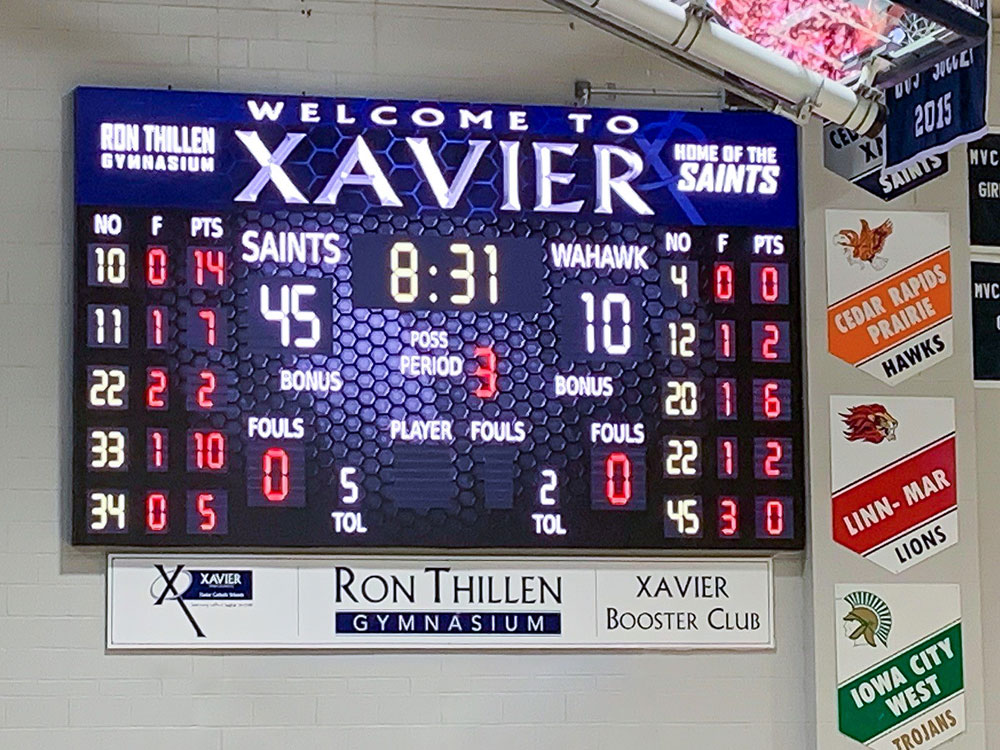 The full-color, high-resolution ReadyDisplay videoboards, measuring 9’10” x 16’5” and 6’7” x 11’6”, were manufactured by Watchfire Signs and installed by Nesper Sign Advertising of Cedar Rapids.

Since installation, uses for the 3.9mm videoboards have been growing. The boards have been used to showcase students being considered for national community service awards, seniors being honored on Senior Night, teacher appreciation videos created by students, and even a community movie night. Plans are underway to broadcast and live stream graduation ceremonies using the videoboards.

“Our original intent was to use the videoboards in the gym to compliment masses and other large assemblies we hold in the facility,” said Adam McDonnell, Xavier High School activities director. “Being able to use them as scoreboards during our sporting events has been a great additional feature.”

Using Watchfire Ignite Sports software, McDonnell and his team have been able to easily create custom-branded graphics so the boards look exactly like they want them to look. “We made a template of our logo and background, then dropped this into Watchfire’s pre-set EasyArt animations and graphics, and it looks completely custom,” said McDonnell. “We’ve been working on building Xavier’s campus branding, and Watchfire has been a bright spot.”

Xavier student interns also are involved in programming and running the videoboards, and McDonnell is hoping to incorporate the videoboards into future visual arts curricula.

Nesper Sign Advertising specified Watchfire Signs for the videoboards because of the company’s reputation for quality and customer support. “This is the first ReadyDisplay we’ve installed. ReadyDisplays come preassembled for easy and quick installation, so there was little disruption to the school,” said Phil Garland, Nesper’s president.