The bright red Dolle’s Saltwater Taffy sign has been an iconic local landmark of the Rehoboth Beach boardwalk in Delaware since the 1960s. 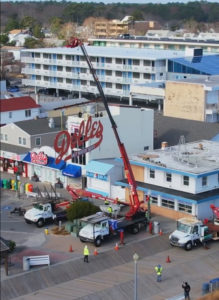 But last year, when Dolle’s Owner Tom Ibach moved his store to another location, the sign had to come down. (Note: The sign does not feature an apostrophe.) At 15 feet high and 30 feet wide and weighing over 3,750 pounds, the sign posed no small task for removal.

Fortunately Rogers Sign Co., Inc., in Milton, Delaware, already had experience working with the sign and was the perfect candidate for this job.

Rogers Sign Co., Inc., first got involved with the Dolle’s Salt Water Taffy sign due to a hurricane. Indeed severe storms had been a challenge for the beachfront store over the years.

The original sign, which went up in 1927 when the store first opened, was destroyed in a 1962 hurricane that damaged the whole building. The famous red sign was installed afterward.

In the 1970s, when another storm blew the sign’s “D” down, Dolle’s called upon Rogers Sign to repair the damage.

Lynn J. Rogers founded Rogers Sign Co., in 1971, starting out as a one-man sign shop. Rogers knew from a young age that he wanted to be a sign painter, hiding in the bushes to watch local painters practice the trade and learning what he could from books and magazines.

Eventually he found a mentor in an older sign painter, Calvin Ball, who taught him the art of hand lettering. Rogers soon became an avid participant in Letterheads meetings around the country, learning from influential artists like Mike Jackson, Pat Finley, Bob Behounek, Ken Malar, Stephen Perish, and others. By 1973, Rogers found himself needing additional employees to meet the demand for signs.

Over the years, Rogers Sign Co., grew into a full-service shop that does everything from design to manufacturing, keeping up with industry innovations while maintaining the artistic traditions and craft that originally inspired Rogers.

When Dolle’s called upon Rogers Sign Co., to rescue their letter “D,” the sign company was prepared to fix the sign for good. The 1960s framing had been constructed in wood that was not capable of withstanding nor’easters. Rogers Sign Co., re-created the framing using aluminum and galvanized steel.

Because the roof needed to be replaced anyway, the company opened the roof, anchored the new frame to the beams, and then rubberized the roof.

The newly repaired sign and frame was engineered to withstand winds up to 150 miles per hour. Afterward Rogers Sign Co., performed regular maintenance on the frame and sign for Dolle’s, which made them, for Ibach, the natural choice to remove the massive sign.

At first, according to Rogers, Ibach planned to move the sign to his new factory building.

However it soon became clear that the sign was too large—at thirty feet wide, it wouldn’t fit on the factory’s twenty-eight-foot facade. 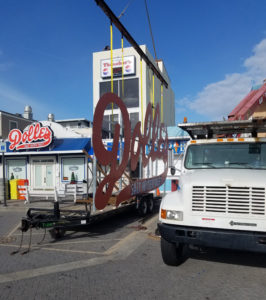 Fortunately, as Rogers says, the museum building was built “like a rock,” as it had previously served as an ice house, and was capable of supporting the sign.

The sign couldn’t go on the museum roof, which had recently been rubberized and had a gazebo-like tower on one corner of the building, but it would fit perfectly on the west side of the building.

“The size of it will allow that no major infrastructure changes have to be made to the building,” says Rogers. “It’s going to mount right on the side and will not even block a window.”

With the future of the Dolle’s Salt Water Taffy sign determined, Rogers Sign Co., created a work plan for the removal.

“We even did a sketch for the city [showing] the placement of the trucks and personnel,” says Rogers.

Because of the timing—the sign had to be removed toward the end of 2021— weather was a major factor. Cold weather can make a job difficult, and snow makes it impossible.

Luckily, while the weather was bad in early December, things cleared up for the removal on December 15. The company chose a Wednesday for the job to avoid weekend crowds.

Rogers Sign Co., had nine personnel on site, all managed by Kenny Terhune, who acted as job supervisor. Terhune, Allen Jackson, Ty Brown, Wil Heuring, Larry E. Holding, and Lynn Rogers served as crew leaders and crew members for the vehicles onsite, which included bucket trucks and cranes, a trailer, and a pick-up truck. Holding and Rogers operated cranes, while Keith “Julio” Revelle was a ground rigger for the cranes. Once on the roof, Heuring took on a dual role as assistant supervisor to Terhune.

Rogers Sign Co., also brought Diane Terhune as job safety officer and June Aydelotte as public information officer. Other Rogers Sign employees who were not on site yet contributed to the project as part of the team conducting planning meetings, the feasibility study, and the logistical coordination were Colleen Allen, Blair Rogers, Deb Breneman, Darlene Matthes, Rodney Wise, and Greg Humphries.

With the sign being removed in one piece by a single crane, Rogers Sign Co., used a spreader bar across the top of the letters, secured to the frame in four places with twelve-foot straps attached with clevises to distribute the weight. “Each of those straps was holding 937 pounds,” says Kenny Terhune.

Meanwhile two team members held ropes with tie lines to each end of the sign to keep it from spinning if the wind picked up.

Safety was a top priority for the job. Every member of the crew wore safety glasses, hard hats, green safety vests, and harnesses, as required by OSHA.

Rogers says, “We put spotters on the ground—a set of eyes on each side of the building so they would see if something went wrong.”

With the grinders throwing sparks as they cut through the galvanized steel frame, fire was also a concern, as a rubberized roof can burn quickly. The Rehoboth Beach Police Department’s Special Operations Unit, along with the Fire Department, were there to provide support.

“The police department had a drone,” Rogers says. “When they were grinding the galvanized pipe off, it took the temperature of the sparks and the galvanized steel.” The team also had water and welding blankets ready on the roof, in case the police alerted them to any stray sparks.

With so much planning and precaution in place, the removal was a resounding success, taking about five hours in total.

Journey to a New Home

Once the sign was removed, the next challenge was to transport it. Still in one piece, the sign was too wide to fit horizontally on a trailer yet also too tall to transport vertically (as its height would cause it to hit the street lights).

Rogers Sign Co., came up with a bracket that allowed the Dolle’s Salt Water Taffy sign to lie diagonally on the trailer—staying within the width of the truck but not so high that it would hit the lights. They drove the sign to a secure location, keeping it safe from souvenir hunters while it is prepared for mounting on the museum.

Installation is planned for the summer of 2022, and the company will build a new frame for the sign to install it flush to the museum façade.

Once the sign goes up, it will be visible from the public park adjacent to the museum, as well as the bicycle path next to the canal. (Note: The museum is currently holding a fundraiser to support the cost of installation.)

As for Rogers Sign Co., jobs arrive as fast as the shop can handle them.

The company’s next project is installing a sign on a waterfront hotel. Rogers plans to use a crane to extend over the top of the building—to a height of 150 feet—and come down on the other side to attach letters 60 feet up, on the side of the building facing the water.

For Lynn Rogers, all of it is exciting. Even after decades in the business, he says, “Every night’s like Christmas Eve. I can’t wait to get to work.

“Sometimes I get up at night and draw, thinking about the next sign.”