For Byron and Kerianne Kroeger, their grand opening of International Minute Press located at 214 Blue Lakes Blvd. in Twin Falls, Idaho takes on very special meaning. Just two weeks after opening the doors of their original location in August 2021, Byron and Kerianne found out that a fire in their building had burned down their center. “We woke up on Friday and everything was gone,” says Kerianne.

As devastating as that news was, the Kroeger family pressed on and managed to continue to operate and build their business. Kerianne shares, “Minuteman Press International was a huge help in helping us overcome the fire. First, they had already made sure we had everything in place in terms of the insurance and the coverage we needed to still continue. Second, the fact that they knew the ins and outs of the equipment and leases, they were able to guide us with that aspect of things. Third, we were able to use another International Minute Press center in Boise for production, which really showed that as franchisees, we really are in this together.”

The community of Twin Falls also rallied around the Kroegers and helped them tremendously. Also, as fate would have it, the location that they now call their home just so happened to previously be a local print shop.

Kerianne explains, “Everyone here in Twin Falls knew our situation and they all rallied together to help us. We had made some friends through different local groups in town and attended the next meeting of the Twin Falls Chamber. They helped us secure temporary office space on a month-to-month basis right after the fire. Then, we found out that another local printer, Blip Printing, had recently closed. They reached out to us and said we could come use their space. It had great parking and visibility, and on one of the busiest streets in Twin Falls. We liked the space so much that we decided that this would be our new location, and that’s where we are today.”

“We are so thankful to the Twin Falls community, the Twin Falls Chamber, and everyone who has helped us build our business. Our grand opening at 214 Blue Lakes Blvd. couldn’t have happened without your support.” -Kerianne Kroeger, International Minute Press, Twin Falls, Idaho

Prior to buying their business, Byron and Kerianne had varying career backgrounds. Kerianne says, “I have a history of working in the nutraceutical industry in the areas of customer service, purchasing, and quality. We have six children ages 4 to 14 so I was spending time at home taking care of them before we bought International Minute Press.”

She continues, “Byron’s background is as a long-term healthcare administrator. We originally moved to Idaho from Utah for his job and they wanted us to move again. We decided to plant our roots here and purchase the business. With six kids, it’s important to have a routine and we love the Monday-Friday business hours.”

Kerianne reflects further on the support and guidance they received from Minuteman Press International following the fire. She says, “At the point of the fire, we really needed a lot of help. We didn’t even have any paper or equipment for a time. Everyone at Minuteman Press helped us figure out where to go and how to get the jobs done. During that time, I took a step back and learned all I could about the FLEX software. As equipment came in, we were able to adjust and start producing all of the work again. It was a total team effort to get us to our grand opening of this great location we now call home.”

For the grand opening, it was important for Byron and Kerianne to acknowledge the support of their colleagues, friends, and family. “We are very family-oriented and I come from a big family myself with five brothers and sisters. My parents were really helpful to us in starting this business, and it was great to have them there as we celebrated all of the good things to come.” 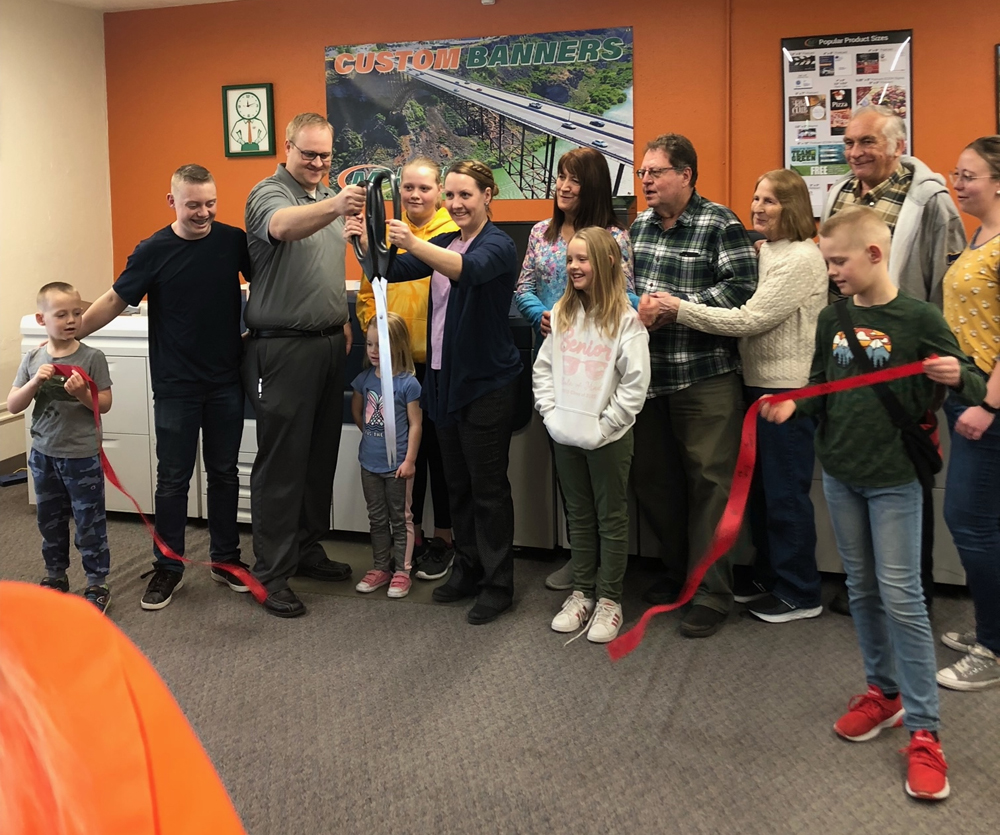 As devastating as the fire was, there was one thing that was salvaged. Kerianne says, “There was a box of mementos from my uncle at the shop, who passed away. That box was one of the only items that wasn’t damaged in the fire. I am grateful to still have those mementos.”

As for the future of International Minute Press in Twin Falls, Byron and Kerianne are excited for where they are today and to get back to business. “I love the diversity of what we do and that we can reach so many different industries with print. Print truly is everywhere. Whether it’s a small business owner or a corporation, we can service our whole community.”

She thoughtfully concludes, “Everyone has already been so supportive of us, and now we are looking to support them.”