Now you can have your glass and show your dynamic digital content too. 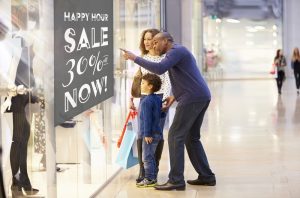 One of the drawbacks of digital signage has always been the space required to install displays on a wall, hanging overhead, or on the floor as a freestanding unit. ActiveScene

, a dynamic solution that transforms existing glass walls and windows into on-demand digital signage, changes all of that.

“We can now just take that glass that’s existing and maneuver it so that it’s either transparent, opaque, or has branding on it,” says Rich McPherson, senior product manager, Sharp NEC Display Solutions.

The Vela film is a polymer-dispersed liquid crystal (PDLC) film that has liquid crystals floating between two electrically conductive membranes. When the film is in its “off” state with no electricity applied, the liquid crystals are left unorganized, which makes the window opaque, giving the appearance of frosted glass. When an electric charge is applied to the film in the “on” state, the liquid crystals straighten and become aligned in a row, allowing light to pass through and thus making the glass transparent.

The Vela film actually provides ActiveScene customers with a choice of three states for their glass: transparent for conventional use; opaque for privacy screen applications; or as a high-quality digital sign display. Electricity to the Vela film is supplied via a busbar, a copper piece adhered to the film, with wires concealed by edge trim that runs alongside the glass. The Vela film only draws about 70 watts of power.

McPherson also cautions installers to carefully consider placement and where the sunlight falls throughout the day when installing the system on a piece of glass that faces outside. “If anybody ever tells you we can beat the sunlight with a projection system, no, you can’t. There’s one technology that can basically beat the sunlight, and that’s dvLED [direct view LED],” says McPherson. “So we would definitely want to qualify what that application is going to be. Is it going to be something where it’s in a controlled environment? Is it facing north or facing east or west? Is it going to be utilized in the daytime? Is it going to be utilized overnight or in the evenings when we don’t have sun on the glass? All those things have to be qualified to make sure that [the specific location] would be the right place to put it. We don’t want to put anything in there where the customer can’t see it.”

As for applications, ActiveScene can be used to transform glass storefronts into large advertising displays, corporate conference room windows into dynamic privacy screens, and glass-fronted museum vignettes into informative signage. It can also be used in the education, transportation, and entertainment markets.

One of the more dynamic benefits of ActiveScene is that it can combine the use of digital signage content and transparent glass. For example, a retail application could run digital sign content promoting a product next to a transparent pane of glass that shows the actual merchandise behind it, or the system could transition to transparency to show the product.

“If you think from a mall standpoint, you’re walking down the concourse, every store has a massive amount of glass in front, and we don’t want to ever block that view into the store. So if we can do marketing and then go transparent and still get the same amount of engagement, that’s the whole point—and actually, it could be more engaging,” says McPherson. “Because you’re doing the promotion and all of a sudden you can see in the store and actually see what they’re talking about instead of having to walk around and try and get around that device.

This works especially well with museum applications, where the diorama or exhibit is the highlight, but a written description adds to the experience of it. The challenge is where to put that description. A small plaque can get quickly crowded and hard to read. Alternatively, you don’t want to obscure the view of the exhibit with words permanently on the glass.

“Well, what if you could take that glass and make it a video?” says McPherson. “It tells the whole story of what they’re about to see, and then they go transparent and you see the diorama. So now you’re making it a little bit more dynamic of a situation.”