FASTSIGNS International, Inc., franchisor of FASTSIGNS®, the leading sign, graphics and visual communications franchise, announced it has been ranked the #1 franchise opportunity in its category in Entrepreneur magazine’s Franchise 500® for the sixth consecutive year. Recognized as an invaluable resource for potential franchisees, the Franchise 500® ranks FASTSIGNS as #47 overall — the only sign, graphics, and visual communications franchise to be recognized in the top 100 — for its outstanding performance in areas including unit growth, financial strength and stability, and brand power. 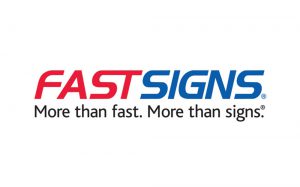 “We are thrilled to once again be named the #1 franchise opportunity for signage, graphics, and visual communication in Entrepreneur’s Franchise 500 list,” said Mark Jameson, Chief Support and Development Officer at Propelled Brands. “Our franchisees’ role of being the go-to resource for visual communications in their communities continues to grow stronger every day. The growth and momentum we’ve experienced is a true testament to the strong FASTSIGNS network, our brand’s adaptability, and the rising demand for our services.”

FASTSIGNS experienced strong double-digit growth in 2021, exceeding more than 15% comp sales and expanding their franchise network, awarding more than 25 franchises last year to develop locations in markets such as Southern CA, Western Canada, and Florida. This, combined with FASTSIGNS crossing the $600 million mark in network sales for the first time in company history, underscores the brands’ adaptability to a rapidly changing business environment and the continued demand for signage and visual graphics.

In Entrepreneur’s continuing effort to best understand and evaluate the ever-changing franchise marketplace, the company’s 43-year-old ranking formula continues to evolve as well. The editorial team researches and assesses several factors that go into the evaluation, including costs and fees, size and growth, support, brand strength, and financial strength and stability. Each franchise is given a cumulative score based on an analysis of more than 150 data points, and the 500 franchises with the highest cumulative scores become the Franchise 500® in ranking order.

“The past year has been one of the most challenging for businesses in recent memory, which made putting together our 43rd annual Franchise 500 list more enlightening than ever,” says Entrepreneur Editor in Chief Jason Feifer. “The companies named to this year’s list showed us how being resilient, supportive, and nimble can help navigate extraordinary challenges and also underscore the grit and innovation that define entrepreneurship.”

The total investment for a FASTSIGNS franchise is approximately $233,555 – $307,308 including a $49,750 franchise fee. Ideal candidates have a net worth of $300,000 of which $80K is liquid. Additionally, FASTSIGNS offers a special incentive for veterans and first responders, including paramedics, emergency medical technicians, police officers, sheriffs and firefighters, which includes a 50% reduction on the franchise fee—a savings of $24,875.

To date, FASTSIGNS operates more than 750 locations in 46 states and eight countries. Of these FASTSIGNS franchisees, more than 10% are owned by veterans.

To view FASTSIGNS in the full ranking, visit www.entrepreneur.com/franchise500. Results can also be seen in the January/February 2022 issue of Entrepreneur, available on newsstands January 11th.